Take your car, breath the sea, look at what nature can give you and discover the historical places of western Sicily…

The Natural Reserve of Saline includes around 1000 ha cost, divided into A Zone, B Zone, between Trapani and Paceco. The most part is private, and it still works as extraction of salt,  in the same way as old age, and is a part of Saline there is a new Factory of Salt.

The mill is very important and suggestive panorama, especially when the sun goes down. 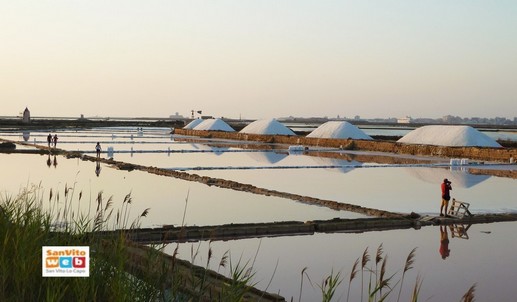 Then, the wit whether is comfortable for many kind of birds, that’s why is a Natural Reserve from WWF.

The Sosalt Factory is the only one most important salt factory, and the Salt from Trapani is included into Sicilian Typical Food, IGP, over then to be Ramsar wet area.

The name comes from Eryx mithological person, Afrodite and Bute’s son, killed by Eraclea.
From 1167 to 1934 Erice was calle Monte San Giuliano and is part of Borghi più belli d’Italia.

According to Legenda, Troians with local people settled down and born Elimi city. Chosen between Siracusa and Carthage they fought for it, till the Romans, 244 a.D.

Virgilio named it in Eneide, as Enea arrived to the cost of Sicily, when his father death, and when spoke about Ercole fighting with giants, Eryx was one of them.

The place is perfect for monk, and there were many churches, nowadays center of cultural science.

From XVI sec on Easter time there is a special pilgrim, as Trapani, Processione dei Misteri, that shows the Passion.

The city is still a Medieval place, very suggestive.

Every year, on Spring time there is a fast race, and driver come from all Italy. They start from Valderice e go fast up to Erice.

Castello di Venere: was built for Venere’s culte. The priestesses of venere given a breath to the sailors come there. The Sanctuary open air is up the mountain and is possible to see all west Sicily. It was linked by a bridge to towers, now there is a marble staircase.

Porta Trapani: together with Porta Spada and Porta Carmine, are the front door of city.

It’s totally uncomfortable to arrive by car, it’s better to go by cableway, also because you can admire the panorama of  Trapani and the Saline.

Matrice: The Sanctuary is in a small street through Porta Trapani, on the right. It discover his Magnificent Building after a small view.

Erice has been pagan for time to time, but the Sanctuary is the best test of Christianity. In 1426 was made a small area for pilgrim that can’t come in the church because of the sin, Gibbena named. The ladder was built in 1766, and by the side there are nine cross came from Venere’s Castle. The church is gothic, and was built as a fortress, you can see the bell tower that is clear a tower.

Inside you can find many sculptures and paints, the most famous is the sculpture of Madonna Assunta, by Domenico Gagini, in 1469, and the paint of Jesus with twelve apostles. Down the altar you can find the relics of Saint Benigno Martire. Focus on the Chapel of Madonna, Lady guardian of people from Erice.

•candies from Erice, made by sugar paste and inside cedar jam with liqueur

Along the street between Trapani and Marsala, after wild Nature of Saline, you’ll see the sign to Lo Stagnone and Mothia a small oyster in the Mediterranean Sea.

Born thanks to Phoenicians , the island  is taken care from  Fondazione Whitaker, the last owner.

In XII sec. had to be a commercial port, and the ancient name was Mtw, because of the coin. 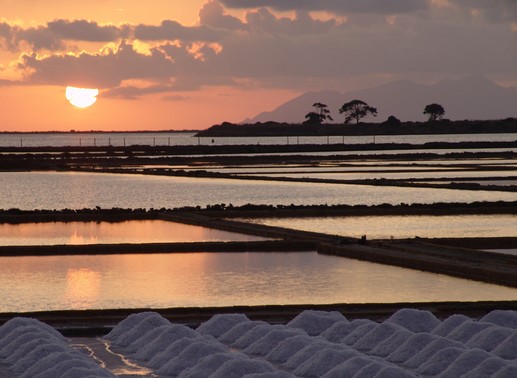 Arriving by boat to the island, you can see that all around it there is a strong wall, probably because it was always a feud given for military goal, and so it had had always one owner.

The last one was an English gentleman, thanks to his studies, he discovered the rest of sanctuary of Cappiddazzu, Phoenician-Punic, part of a necropolis, Casa dei Mosaici.

Soon the University of Leed in England, and La Sapienza from Milan, wish to take part of these discover. 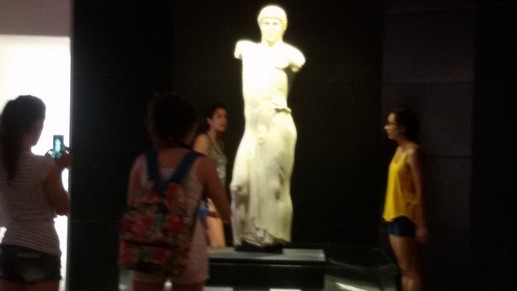 Very famous is the statue of Giovane di Mozia, 450-440 a.D. , an ephebo ( young man in his twenties, becoming adult) discovered in the underground, thanks to the University of Palermo. The statue is completed, miss only the arm and the foot.

In the South area you can find the necropolis, with the Kothon, was a sacral swimming pool near a  Sanctuary. The swimming pool contained fresh water in spite that is next to the sea. It is linked with a sacral well. 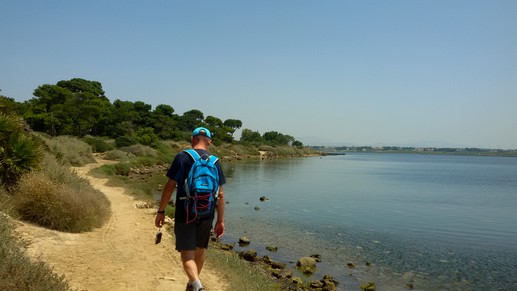 It is possible to go by a boat, despite it was a street that in old age linked the island to the mainland, and the boat leaves every half an hour from Stagnone Lagoon to Mothia, and the price is around 5 Euro.

The archaeologial site of Segesta is part of Calatafimi-Segesta throw the way A29 from Trapani. Founded by Elimi, old Sicilian population, nowadays is possible to visit the magnificent Tempio , as a Pantheon, still intact. Close to it there is the Greek Theatre into the rocks, V sec, that could contain around three thousand people. It is up to the mountain Barbaro, so be careful, you spend much time, and be equipped to go there!

Nowadays is still possible to participate to a Spectacular performance, especially between July and August, Segesta festival.

The archaeologial site of Selinunte is in Castelvetrano and is the biggest site in Europa. I suggest to go by car, to have time to spend in its panoramas. The archeological area is divided into zones. The most important things is the acropolis where you can find many rest of Temples and old buildings up to the sea.

Marsala is situated in Capo Boeo, and it’s known because Garibaldi landing there to start to unit Italia. Also there is the wine Marsala, a special d.o.c. wine known all over the world. It was called Lillibeo and includes Mothia. Cicerone was sheriff of Marsala, and he said:

A punic shape was founded into the deep sea, and now is in Museo Regionale Baglio Anselmi.

There is an archeological area, inside the museum, that shows the roman age. It was a roman port, strictly link to Trapani. It is known, over the romans rest, for the wine and the liquor Marsala, a special kind of grapes that is only in Marsala.

Characteristic of Marsala is the high number of small  neighborhoods one close to other, but different. Each one seems to be detached to the other. Many of them neither have a central place, but the chianu an area where around people have started the local life, as a central place. We can count 100 neighborhood.