The town of Selinunte was founded in 650 A.D., thanks to the Megara Iblea people. In latin Selinus, take the name from the plant of wild celery that grows up still now. It was between two valleis: Belice and Modione and next to the Platani river. 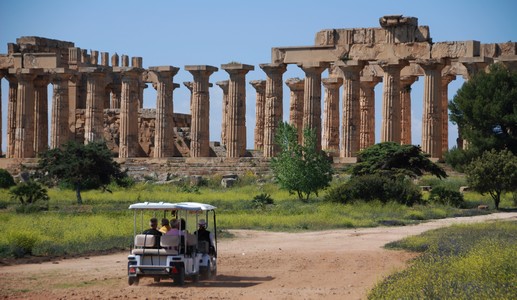 Selinunte was the only one Greek colony on the border between Greeks and Carthaginians, so it is in a special position. Probably this would be the problem that caused the destroyed of the town. Greeks and Punic people got in war in V sec. A.D. that’s why Selinus became a simple port, Punic port, without any interest in goodness, and the town lost all beauty. Till Romans conquered Sicily, Selinunte was the only Greek colony with his own currency and his language.

Right now it is the biggest archaeologic park of the Greek world still good and you can spend from 2 hour to 6 to visiting all part of it. In the Archeologic park, there is the acropolis full of temples while other ruins are up to a small mountain. Many temples are ruined due to earthquakes but it’s easy to imagine the original shape.

Sculptures found in Selinunte are in the Salinas Museum of Palermo, except the amazing: The Efebo of Selinunte, that is in the Museum of Castelvetrano. It is made by bronze and, together with the Aries of Siracusa, represent the only Greek sculptures in bronze, so big.

The archaeologic park is 270 ettaries big, and it’s divided into 5 areas: the acropolis, the necropolis and three little mountains, in one of them there is the Malaphòros Sanctuary.

You can go in throw two entrances, one is in Marinella of Selinunte, and the other one is in Triscina of Selinunte, closest to the Sanctuary of Malaphòros. It is locked by wall, because of pirates. In the old age, the acropolis was divided into small areas, each one has his temple.

The acropolis is made for the most part, by the limestone of Campobello di Mazara. It is known that about 409 A.D. the mining was stopped by Carthaginians army. Nowadays we can see all phase limestone working, because workers immediately stopped work and leaved away Campobello of Mazara.

In the Middle Age Selinunte became a place for hermits, till an earthquakes, in byzantine Age, distroyed all temples.

Federico II said that was not possible to leave out limestone from that archaeological area and just in 1809 on the Italian Government started working as building again Selinunte.

Nowadays Selinunte welcomes the most important Greek park  and it’s the perfect place for whom loves walking around nature and history together.

Close to Selinunte, there is the Triscina beach, an enormous beach with many beach services, where you can go after an half day throw the archaeological park.

Breath the Mediterranean Seaside with Greeks!!