Trapani, the so called "city of the two seas", is 45 km. far from San Vito Lo Capo.
With its old centre rich in baroque churches and elegant buildings, this town is definitely worth to be visited.
Its coasts are touched by the Tyrrhenian Sea in the north, while the harbor in the south is touched by the Mediterranean Sea.
In front of the town you can see the silhouette of the Egadi Islands.
If you want to visit Trapani you have to bring with you a swimsuit because the beaches are right in town . Your trip can become a really relaxing experience.
There are many shops and craftsmen for your shopping, as well as several bars, restaurants and "rosticcerie" for your lunch.
Do not miss the visit to the Natural Reserve of Saline of Trapani.

We suggest only some of the most important things to see around the centre of the city.
Let yourself be captured from the old charm atmosphere of Trapani.

Tower of Ligny
An imposing but also elegant tower of defense in tuff and stone, stands on the extreme tip of the city of Trapani. The tongue of land on which it is located divides the Mediterranean from the Tyrrhenian Sea and from its terrace we discover a city embraced by the sea.
It was built in 1671 at the behest of the Spanish viceroy, Claudio La Moraldo and today is the seat of the Civic Anthropological Museum.
Perfect location for numerous summer events and interesting exhibitions and cultural events. It can be reached by following a pedestrian road which runs south from a cliff and on the north side by a small beach, which is the destination of many bathers.

Castle of the Colombaia
Those arriving by sea in Trapani are welcomed by a castle built on a small island on the port. It is the castle of the Dovecote or castle of the sea. Very impressive, not only for its position but also for the millennial history of which it is soaked. Its first defense tower was erected by the Carthaginian Amilcare Barca in 260 BC and witnessed the great naval battles between the Romans and Carthaginians.
Its roots are even rooted in myth, it is said that here the doves stopped, arrived from Africa, destined to the Goddess Astarte, whose temple was in nearby Erice.
Its stones are imbued with the thousand-year history of Trapani.

Walls of Tramontana The passage of the Spaniards to Trapani also remains a beautiful wall built to defend the city from attack by enemies. It is located on the north side of the city and can be traveled from the former fish market square up to the mighty Bastione Conca. A magnificent view of the ancient city, particularly at sunset.

Astronomical Clock
One of the oldest gates of the city is located in via Torrearsa, in the heart of the historic center. In 1596 a tower was erected on the door where an Astronomical Clock was installed. Even today it is possible to admire this splendid mechanism that marks the hours, the seasons and the lunar phases.

Jewish Ghetto
Trapani preserves in its ancient Jewish quarter one of the most interesting examples of Plateresque Catalan style present in Sicily, the Palazzo della Giudecca. This elegant building, with a beautiful diamond-studded ashlar facade, was built by the Ciambra family in the first half of the 16th century. It has a side tower and an ogival portal.

Church of Purgatory and the Misteri
Twelve statues of the Apostles show off in the beautiful Baroque façade of the Church of the Holy Souls in Purgatory, designed by the architect Giovanbattista Amico. The church houses inside the 20 Vare of the Mysteries of Trapani, is located in the homonymous square a few steps from the Cathedral. 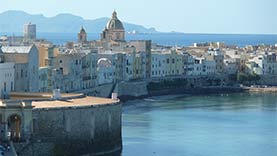 Fly to western Sicily with the new Ryanair flights

Discovering Trapani, the magical city of salt and wind

Called City of Salt and Wind, Trapani is situated in the North - West of Sicily. It offers you spectacular shining and natural views down the Mediterranean Sea, over than folkloristic story and typical food & wine.

Holiday Apartments for your holiday in Sicily

... stay like a local in San Vito Lo Capo with your family!

Trapani, lying on the extreme tip of western Sicily, with its sickle shape is bathed to the north by the Tyrrhenian Sea and to the south by the Mediterranean. City of the two seas.